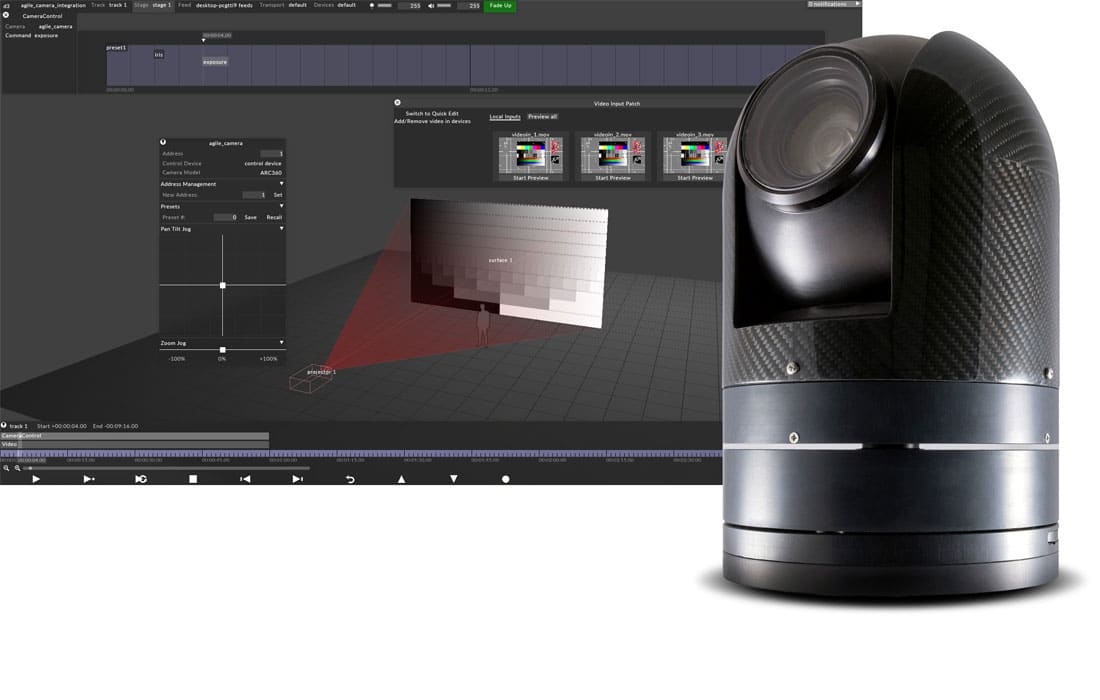 Posted at 09:08h in General, Products by Liz Cox

disguise has launched the latest version of its award-winning software, which supports the ARC PTZ protocol. The software is used to design, sequence and control live shows and experiences. Version r15.2 now includes integrations with Agile Remote Cameras’ range of PTZ cameras, enabling live video feeds from the discreet PTZ cameras to be used as part of the visuals on impressive live events. The ARC360 cameras were chosen for integration thanks to a customer-driven implementation request from Universal Pixels, who requested this for a large event.

How the disguise system works

disguise takes the video content from Agile’s ARC360 PTZ cameras and sends it to projectors, LED screens or any other displays. The latest r15.2 software release brings full control over exposure, gamma, gain modes and other settings, which can be added to the show as a control command. It’s also possible to record, pan, tilt and zoom information as a preset. This means that at any given point in a show, the cameras can pan to the drummer, for example, then later move on to the guitarist. This can all be adjusted from the software interface.

The disguise system is based around a 3D engine. To project onto a set at a music concert, you first load a 3D model of the set, then a workflow specialist can use the disguise software to place projectors, cameras and other production elements into the space, seeing in real time the impact of those technical decisions on the design. In order to do this, the disguise system features many integrations with external equipment, including matrix switches and cameras, such as the ARC360 PTZ cameras.

Shows are set up using a timeline, with different modules added in as required, including video files, audio clips, web pages, or control commands for a PTZ camera. The control command unlocks the ability for programmers to be able to use the ARC360 PTZ cameras in the timeline. These commands can be built into the infrastructure of the show. A programmer sat front-of-house is now able to see the feed from the cameras and can set these up for each show slightly differently, depending on the venue. Once in the system, the live camera feed is treated in exactly the same way as any video that’s coming straight off the server, meaning you can apply visual effects or map it to surfaces.

Housing the award-winning Sony Exmor R™ sensor within a precision-engineered housing, the ARC360 PTZ camera provides the highest quality image under a range of lighting conditions. The camera is completely waterproof and ideal for operation whatever the weather. It offers a genuine remote solution for broadcast and live events, featuring 3G SDI connectivity, with RS-485 or IP/PoE connectivity for feedback and settings. The IP connection provides many benefits for customers, including a web interface for easier address management and network configuration, plus configuration files for each camera. The native IP interface also removes any requirement of additional protocol converters, with the PoE capability removing the need for additional power supplies.

The disguise servers come with a lifetime software license, plus there’s a version of the software that runs on any Windows machine, called ‘Designer’. This is useful for pre-visualisation and to make changes during a show as required. The disguise system can be triggered from the lighting or sound desks, or via timecode, and can also act as the master. Additionally, the system can also be set to trigger at a certain time of day, which is useful for installed AV applications, such as those found in shopping centres. The new integration with the ARC360 cameras opens up the possibilities of including unobtrusive live video feeds within the system, wherever it may be installed.

disguise is building the next generation of collaborative tools to help artists and technologists realise their vision. It began creating shows for the likes of Massive Attack and U2, then built and developed its own media platform because no others were available. Before long, other designers were asking to use its high-performance software and hardware, and disguise (formerly d3 Technologies) was born. Now, disguise works with some of the world’s most talented visual designers, giving them powerful technologies to conceive, plan and visualise experiences at the highest level. For further information, please visit disguise’s website at www.disguise.one.